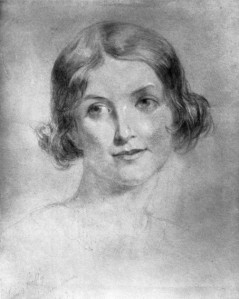 George Barnet was a quiet and antisocial young man, but “very fond” of the theatre. He was considered hard-working and respectable by his employers, a law stationer, but had recently showing symptoms of what his family and friends believed was insanity or at least “melancholy”: spontaneous and inappropriate laughter, delusions, and unpredictable spells of depression. On Saturday 17 February, 1816, Barnet took a seat in the sixth row of the Pit at Drury Lane theatre. The farce that evening was Modern Antiques, or the Merry Mourners, with the 26-year old Frances Maria Kelly playing the role of Nan, a servant. During the first act, as Kelly embraced the actor playing the romantic lead and then backed towards the stage door, Barnet stood up, drew out a small pistol from his pocket, and fired it at her.

His shots missed the actress, apparently bouncing off the lamps and piercing the stage flats. There was chaos in the crowded theatre as other members of the audience grabbed Barnet, confiscated the pistol, and dragged him outside. Unhurt but clearly shaken, Kelly insisted on finishing the play.

In front of the magistrate, Barnet said very little, insisting that Kelly could explain his actions. Kelly, however, did not know him, although she recalled two letters he had sent to her a few days earlier. Read in full during Barnet’s trial, the letters reveal a disturbed author whose delusions and misogynist rage were constructed out of theatrical clichés:

Did love ever prompt you to rehearse,
The part of honour unessayed in verse;
Or passion strive to guard it from decay,
Applause to gain, or applause to pay.
The works of genius would its charms resign;
And your honours praise echo every line.
Mistaken girl! ambition would you sway.
I assume a part in each concerted play?
Your sex’s softness endeavour to abuse,
And for offence-not even one poor excuse.

I have here madam, defined your character and disposition in a few words; and shall go so far as to say, that you are not a stranger to my name.

Years ago I was your admirer; but always met with disappointment. Coquetry indulged you; although always obtained at the expense of others; without vanity to myself, I think my good intentions towards you have been more trifled than any of my cotemporaries. My claim to your person is therefore greater which determines me to demand your hand, or in other words to make you my wife.

You will either consent to this, or accept my challenge. I will attend you at any hour you please, on Wednesday, or before. I have witnessed your dexterity of firing a gun; but suppose a pistol will better suit you, as being much lighter.
Had you not infringed the rights of your sex, I should not have thus addressed you; but as it is, no other person can better answer this letter than yourself; it shall not break

Madam, I received a letter yesterday evening, which from its apparent rusticity, I believe it to be yours. You would act wiser if you was to add your name, as I am not sufficiently acquainted with your hand writing, and as I hinted in my last letter, not to subject others to be answerable for your forwardness. If the terms specified in my letter, were not to my satisfaction, why not express yourself as one becoming your profession. Why suffer your temper to over rule your reason? I love the sex, and once esteemed you as an ornament to it, until you would my indignation by your impertinence and scandalous abuses.

You are very partial to a disguised male dress; but let me not experience any more of your folly; for if you do, I will secure you as an impostor, and punish you for your temerity.

I am Madam, your well wisher,
GEORGE BARNET.

Barnet refers to himself, and is often referred to, as a jealous ‘admirer’ of the actress. He is sometimes compared to James Hackman, who had killed the singer Martha Ray in front of Covent Garden theatre in 1779. Hackman, though, had had some sort of personal liaison with Ray (although it is not clear if this was as serious or romantic as he believed it to be). Since their first appearance in the late seventeenth century, actresses had been considered potentially sexually available to the elite men in the audience. Barnet was not alone in assuming that a woman’s onstage performance of “coquetry” equalled promiscuity offstage. Kelly, though, was no Restoration demi-rep and Barnet was not Kelly’s lover, nor even her suitor in any sense she would have recognised. He had probably never seen her outside the theatre. In other words, George Barnet was what would today be called a ‘fan’ – and a type of fan now familiar from representations of stalkers and celebrity obsession in news and fiction, but which in 1816 was still an unusual case.

The one-sided nature of the relationship between Barnet and Kelly can be seen as emerging, at least in part, from a new dynamic by which the public related to ‘celebrity’ individuals such as actresses. Kelly had taken no notice of his aggressive, dementedly possessive letters, perhaps because she had received many letters in similar tones and regarded them as a standard aspect of professional life. Theatres, increasingly, encouraged audiences to believe that they shared genuine emotional bonds with their stars: lighting, music, costume and acting all focused attention closely on their bodies and displays of feeling, while gossip fed to the press and published in celebrity memoirs meant that their personal lives were often also well-known to those watching. In prologues, epilogues and asides actors – especially charismatic lead actresses like Kelly – seemed to speak directly and confidentially to their fans. Theorists in the twenty-first century suggest that these kinds of celebrity (taken, of course, to a whole new level with technologies such as cinema and the internet, but present in nascent form in 1816) enable “cultish fans”, for good or bad, to “construct para-social, imagined connections to celebrities or actants, who fulfil friendship functions or serve as spaces for projecting and evaluating schemas that make sense of human interaction.” (Toby Miller and Richard Maxwell, 2001)

For a lonely young law stationer, lacking much social or romantic contact outside his frequent trips to the theatre, it was perhaps natural to imagine the theatrical world as his real home, and Kelly as his real lover. Most people, of course, found it easy to distinguish between the illusions of celebrity and real relationships. Barnet, dangerously, did not. A jury at the Old Bailey were instructed to find him not guilty on the grounds of insanity, but he was confined to an asylum. The newspapers reported that he “was plainly dressed, and appeared perfectly calm during the trial; occasionally looking, with a faint smile, at Miss Kelly.”

Read the trial of George Barnet at the Old Bailey Online and explore an exhibition on the history of actresses at the National Portrait Gallery.